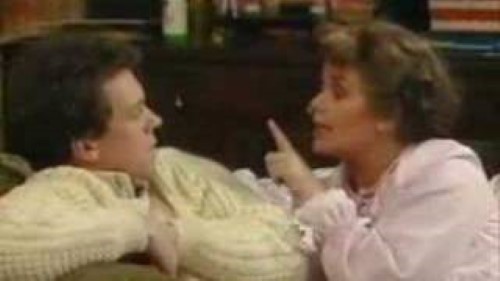 We have seen Dawn French in a number of very funny scenes from a variety of television shows and standup routines. One of those that many of you probably appreciate is the time that she played on the sitcom, Girls on Top. Although it only existed from 1984 to 1985, Dawn French certainly did leave her mark and you can see one of the funnier scenes in this clip.

In this scene, Dawn French is completely enamored by a special guest star that was appearing on the show that week, Hugh Laurie. Not only is she enamored with him, she continued to harass him from the moment that he gave on the set and she even ended up stealing his socks at one point! Of course, we realise that it was written into the show but we certainly can see classic Dawn French through every step of the process.

Not only did Dawn French and Jennifer Saunders star on this sitcom, they were also responsible for creating it they wrote it as well. It just shows that she certainly was a talented lady and although we may laugh at what she does on the stage, she also does a lot of behind-the-scenes.