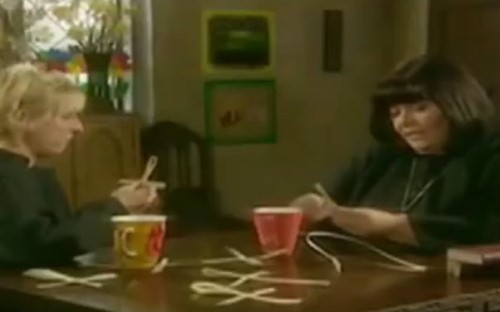 There is a certain talent to telling a joke that not all of us possess. We may hear the joke told by someone who does not have the natural ability to make us laugh and it could invoke a chuckle but if we hear it from a really good joke teller, the same joke could make us laugh out loud. That is why we really appreciate when certain people tell jokes but others we may roll our eyes when they start telling one.

Then again, there are certain people who are professionals at telling jokes and they even make a living out of it. That is the case with Dawn French, and when she is telling a joke, many of us might even start laughing before she gets to the punch line. Unfortunately, when she is the Vicar of Dibley and is telling a joke to Alice Tinker, it doesn’t always land where it should land.

The joke that she is telling in this video may be one that you have heard before. It involves a number of super heroes, including wonder woman and Superman. In her usual fashion, Dawn French tells it perfectly but unfortunately, she is telling it to the wrong audience. At least you’ll get a laugh out of it.